We take our Systems into the scientists’ laboratories

One day I received a letter inviting me to lecture for the medical students of the University of Texas at San Antonio, Texas, at the New Health Center Medical School. I accepted the invitation.

When the day came, I took Antonio, my youngest son, with me. A Dr. B.A., the head of the department of psychiatry, and Dr. M., head of the depart of psychology, received us. Dr. B.S. introduced us to the class, telling the students that we were the ones who were teaching people to control their brain waves and that I was going to lecture to them on that subject.

It surprised me that they had chosen that lab for the lecture when they had brand new lecture halls all over the place. Here in the lab they had all the electroencephalographs, tape decks and other kinds of electronic equipment. I could see that they were all turned on.

At that time, scientists were saying that the only way one could produce the alpha brain waves was during a state of reverie and in no other way. If a person tried to visualize someone and describe that person while producing alpha brain waves, that would cause the alpha activity to cease and beta to begin, scientists believed.

They called that effect "alpha blocking."

They said that another way to block alpha once you have it is by working a math problem, and this would cause beta brain waves to replace the alpha.

After the one and a half hour lecture, the students applauded, and Dr. B.A. complimented me, saying, "Well, the theory on brain wave control is interesting, but then it is only a theory, just a theory. The proving of a theory is what is very difficult," he added. "Can you," he asked, "demonstrate with the EEG? We have them right here."

As if I didn't know you have them right here, I thought.

"I just happen to have my own EEG in my car, which I trust best," I said to Dr. B.A. "If you don't mind connecting me to both EEGs, we will demonstrate." 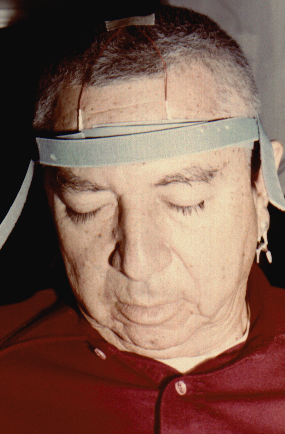 The students went to the car and brought my EEG. They connected me to both, but I did not like their machine because they used electrodes that are applied subcutaneously. The electrodes are needles that they stick under your scalp, so after cleaning my scalp with alcohol, they stuck their needles under my scalp.

I sat there with little trickles of blood running down my face, wires pulling me in all directions, and they asked me, "Are you comfortable, Mr. Silva?"

What a question to ask, as if I did this sort of thing every day! The electrodes on our own equipment are a surface contact type, without needles.

I then went over what I was going to do step by step, explaining that the purpose of the demonstration was to prove that one can learn to produce the alpha brain waves whether relaxed or not, and one can continue producing alpha if one needs to, for as long as one desires; that producing alpha is a learning process.

Let me explain how the EEG’s worked:

The electrodes of the EEG detect minute electrical emanations from the brain, and the EEG filtering system has been tuned to allow nothing else from your brain to pass into the amplifying circuits of the EEG but Alpha. Once you produce alpha brain waves, these are allowed to pass, be amplified by the EEG, and then converted into sound.

So if you hear sound from the EEG speakers, you are producing alpha waves. The sound that you hear turns on and off ten times per second.
After I had concentrated for just a few seconds, the sound came through both EEGs, their machine and my machine.

I described Dr. S., while continuing to produce alpha at the same time.
I then worked a math problem while producing alpha.

Then I came out of my level of concentration and said, "I thought you said it could not be done." Then I added, "You see, it is a learning process."

Drs. S. and T. were checking the EEG’s print-out to be doubly sure of what had taken place. They accepted it as fact after their examination.

Then Dr. S. suggested that maybe I was an unusual individual, such as some yogis who have spent all their lives practicing special exercises, and Dr. S. added, "But not that you can teach everybody to do that."

I then said, "Anybody who takes our training can do it." Dr. S. appeared not to believe this, so I then said, "My son here, Tony, had taken the training. Would you like to test him also?"

Dr. S. thought it was a good idea, although Tony, thinking about the needle electrodes, did not think much of the idea.

But Antonio was wired up and tested. He did better than I did!

Then I said, "You see it, it can be done, and as you can see, he did better. My brain is not as young as Tony's; mine is slightly worn out!" The students all liked that.

Dr. S. then said, "Well, there is no question about it, you have proven to be correct in your theory. We figured that if you were a fraud, you would not have accepted our invitation. And when you accepted our invitation, we thought, ‘Maybe he only thinks he is right.’ Then we felt we could straighten out your mistaken concept. But here you have proven to be correct."

A Dr. B.R. had been invited to witness this demonstration. He was the head of the department of psychophysiology at Trinity University, also in San Antonio. This Dr. B.R. suggested that since this discovery was a first on record that we should conduct a scientific project so as to prove "What we did here" to the scientists who are saying that we do not know what we are talking about, that this is impossible and that we are psychoceramics, which means "crack pots."

Dr. B.A. and Dr. M. also suggested that we participate in helping to find answers to difficult health problems and that in turn they could help me find solutions to some of our problems.

By this time, the doctors were aware that some people who had suffered chronic or migraine headaches had taken our training and had been relieved of their problem.

Dr B.A. added, "One thing we must require is, if and when we help you in any way, that our names or the name of the medical school should not be mentioned or appear in any paper. And when you help us, your name should not be connected with us in any way."

Later the board of directors at the University of Texas somehow became aware of the project, and the project was canceled. Later Dr. M. came to work with us full time and Dr. B.A. went to work in a hospital in Phoenix, Arizona. That was the end of that project.

Dr. H., the director of a Science Foundation of Los Angeles, California, and I had a talk about what Dr. B.R. from Trinity University had said about the project he had suggested. Dr. H. thought it was a good idea and offered to help set up this project. Dr. H. had been helping us in that capacity since the early 1960s.

The project was conducted using medical students from the university that I trained for the testing. This project turned out to be very successful, and proved once and for all that we were correct in saying that one can learn to control the brain waves. Results of the project were published in a scientific journal from England. Of course, we have copies.

Dr. H. and I had further talks about other projects, such as training petroleum engineers and geologists at the PhD level for a large oil exploration company, and perhaps bringing Uri Geller to the United States to be tested.

Another project I had in mind was to confirm what Dr. P. reported on Arigo from Brazil, the so-called "Surgeon with the rusty knife." But I received a report that Arigo had been killed in a traffic accident, and that canceled this project.

Next: Research on lotteries