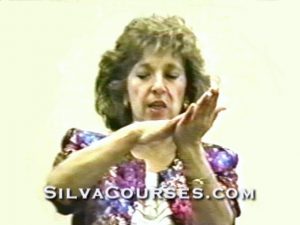 A woman who lived nearby told us that her sister in Chicago had a tumor.

Isabel entered her clairvoyant level and accurately described the tumor, telling us it was wrapped around the heart and doctors would not be able to get in there and remove it.

The neighbor started crying, and said Isabel was correct.

When I saw how accurate she had been, I asked Isabel to look around and tell me about the environment in the house in Chicago. She descried a baby, and the woman who was changing the baby's diapers. I told her to look around the room and describe it.

She did, told us that on the night table near the bed, there was a real unique ash tray, one that looked hand made, but made of twisted metal, with the ends turned up, looking kind of like a shell.

We confirmed from our neighbor the appearance of the red haired baby. Then three months later, the people from Chicago came to Laredo to visit. When our neighbor told them about the experience with Isabel, her brother-in- law from Chicago laughed and told her, "You mean you believe all this stuff, this hogwash?"

The neighbor later invited us over. I asked the man if he had ever seen Isabel before, if she had ever been in their home. After he assured me that she had not, she described the room, and the unique ash tray.

Boy, his eyes went wide. "Who told her?" he asked.

Nobody told here, she picked it up on her own.

This experience came two or three years after Isabel had first shown signs of being able to read my mind. We had been experimenting to see if she could detect information from beyond the immediate environment, and this gave us our first change to confirm that she indeed could do just that.

Here we were in 1953, I with my subject functioning as a clairvoyant able to detect and describe problems at a distance, and best of all health problems. I figured this was a real breakthrough because I had read that parapsychologists and educators were, at that time, convinced that the I.Q. factor and the "Psi" factor (the so-called Extra Sensory Perception factor) could not be enhanced. They claimed that some people were born with a certain fixed amount, God-gifted, and that was it.

By this time, my study of psychology had led me on to parapsychology and I had written to several organizations that had something to do with parapsychology. I wanted them to let me know what they were doing in that field of work. I found out that they were looking for people who exhibited extra-ordinary mental faculties. This is how I became aware of Dr. J. B. Rhine of Duke University.

Next: Communication with Dr. J.B. Rhine