How we trained clairvoyants and healers 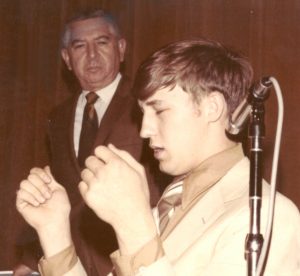 As we continued from 1953 until 1963 training individuals to function as clairvoyants, we found we had more and more people attending our general meetings that we held every Friday night.

There were people we called "regulars" who came to the meetings every week. These "regulars" could invite their friends, and since the group of "regulars" kept growing, and more visitors kept coming with the increasing number of regulars, the meetings kept getting bigger and bigger.

Often the friends wanted to become regulars, and once hey did, they would bring their friends.

Some of the regulars volunteered to help conduct the sessions. We had rosters of names of volunteers who could serve during the month, and had a new group every month.

Some of the volunteers would be in charge of welcoming and registering new people.

Others would give the introductory talk on our research.

Still others could give the conditioning cycle for relaxation, what we now call the "Mental Training Exercise."

A few volunteers would be in charge of collecting the health cases to be worked that night.

Others would be in charge of refreshments, and still others would be responsible for contacting five of our trained clairvoyants to be on hand to do the case working for the Friday night meeting.

This was an exciting time in our research for a lot of people, for many were involved in helping to move the work forward. All of the new people at the weekly meeting would be registered and seated by the time the welcome talk began.

Following the brief talk, we would have the relaxation exercise.

Then came a break when we served refreshments and cookies.
After that, we would begin assigning the case working to our clairvoyants. We explained to the audience that the purpose of case working was to give practice to the developing clairvoyants as well as to see how many people could be helped by what the clairvoyants did.

To start the case working sessions, we would call for five cases to be worked, along with the people who presented the health cases. These people were sent with their cases and one of our office clairvoyants for the night to a private section of the building where they would not be disturbed.

Then we would assign a clairvoyant to the next five cases, and continue until twenty-five cases had been assigned, five to each of the five clairvoyants.

Even with five groups working at the same time, our sessions often lasted until midnight, and sometimes even one or two o'clock in the morning, depending on the interest of the people involved, or the complications of the case.

The people who presented cases were cautioned to be careful not to give a fictitious case to one of the clairvoyants because they were beginner and might be confused by this. Besides, it would not help anybody, but would be a waste of time.