It was in 1953 that I tested my first trained subject and then wrote to Dr. J. B. Rhine about it. Dr. Rhine was head of the parapsychology department at Duke University in Durham, North Carolina, and a leader in testing people who had this psi factor.

Dr. Rhine was adamant in saying that the psi factor was like the IQ factor, that some people had more and some had less, and that neither the psi or the IQ factor could be enhanced.

The way I saw it, both could be enhanced.

The IQ factor is merely a measurement of how many problems you can solve on a test in a certain period of time. I started helping children to do better in school.

When a child uses more brain energy to impress information on brain cells, the child has better recall and better memory. The more information that a person recalls, the more problems that a person will be able to solve.

That's how I believe intelligence should be measured: by the person's problem-solving capacity. The more problems a person is able to solve, the more successful the person is bound to be in everything.

Dr. Rhine told me that clairvoyants (people with good guessing ability, with an enhanced psi factor) were born, not taught, and that my big mistake was not having pre-tested my subject. Dr. Rhine hinted that I, not knowing any better, was working with a natural clairvoyant to begin with.

I did not know that to prove things to an academic scientist I had to pre-test a subject to see how much of the psi factor the subject had to begin with. I figured the number one man in parapsychology was saying it, so it must be right.

Besides, what Dr. Rhine said to me made a lot of sense, but the thought of starting all over again was just too much for me. It had taken three years to get where I was, and that turned out to be a big "Zero" according to Dr. Rhine.

It was with these bleak thoughts on a dismal, cloudy Saturday morning that I decided to quit this nonsense.

I though about my previous experiences, how I started to study psychology after meeting the psychiatrist, about the picture of Christ in my wallet, the light in the night five years later and the Christ awareness and the lottery ticket that won me $10,000.

As I finished packing my psychology books and storing them in the attic, it started to rain. It really poured, with thunder, lightening, the whole works.

As the rain calmed down a little, the children went out to play in the rain. The water was flowing down our unpaved street like a muddy river. I sat in the house, on the same couch under which the psychology book had ended up when I threw it across the room and resolved not to waste my time any more on things that didn't make any sense to me.

My mind reached back into the memories, the feelings associated with the research I had done to that point, the research that now had come to a dead end.

I remembered reading the "One Solitary Life" at the army reception center with tears in my eyes.

I recalled the dream-like experience with the numbers that are burned into my memory forever, along with the Christ awareness, and the lottery ticket my friend found late the next night.

"Did that get me back to studying psychology?" I wondered. "Where does Christ come in and why?"

Suddenly Ricardo, my second son, who was almost ten years old, came bursting through the front door and interrupted my thoughts.

It was still drizzling outside, and Ricardo was dripping water on the follow as he came running towards me.

"I found this outside," he exclaimed as he dropped a roll of heavy paper on the table, then turned and ran back outside, leaving his treasure behind.

As my gaze locked onto the heavy roll of paper, something attracted my attention immediately:

The roll of paper appeared to be dry!

I picked it up and sure enough, it was dry.

When I unrolled it, I got the surprise of my life, a shock that brought me to my knees again.

Christ was staring at me. 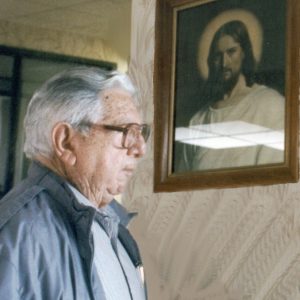 It was a large picture of Christ, just His head and shoulders, but as large as life, looking at me with dark piercing eyes, not judging, but full of love and compassion and I felt as though He was asking:

"Why did you stop studying? Did I not tell you to study psychology?"

Tears came to my eyes and a feeling as though I had been a bad boy for not obeying.

I went into the bathroom and had a good cry, swearing that I would continue with this work, and not ever again stop for the rest of my life, even if it meant giving up my very successful electronics business.

I went into the bathroom because I did not want Paula or the children to see me crying. It would have been very difficult for a man almost forty years old to explain the reason. I had not cried like this since my grandmother, who raised me, passed away.

Once again, I got out my psychology books.

I framed the large picture of Christ, and it has been hanging in my office ever since.

This last experience, with the picture of Christ, gave me more determination than ever before.

I also consider this experience to be responsible for my System, developed through research, being brought to millions of people throughout the world, helping them become more spiritual, more healthy, wealthy, successful and happy human beings.

I named the picture of Christ, "The Ecumenical Christ," and started to study the Bible more seriously. I was trying to find a connection between Christ and my study of psychology.

Later, I will explain what I found.

Next: Scientists investigate us