The man who unlocked the secrets of the human mind

Even though he was born to poor parents in Laredo, Texas, on the Mexican border, Jose Silva was always successful. His story is a true American success story. In fact, his story transcends time and space: It is one of the great success stories in the history of the world.

The youngsters were earning as much money after school as their parents earned working full time. And young José was earning as much every day as the typical adult in Laredo earned in a week.

This was pretty impressive for a youngster who had educated himself, had supported his family since age six, and had earned the respect of people in the community.

But there was one area where Jose’s hard work and street smarts weren't paying off.

Even though Jose had experienced success in many areas, his children were not following in his footsteps. Some bad report cards convinced him that he had to find the answer.

The answer seemed to be in the way that super successful people - like himself - used their minds.

This raised several questions in his mind:

He felt that the answer was in the mind. But how could he explore the mind?

Jose began to study psychology - the study of human behavior. One of the things he learned is that the brain operates on a small amount of electrical energy, and that this electric current vibrates or pulsates at different rates.

He wondered why this was so. 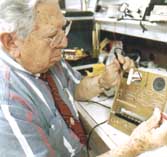 Then he drew on his experience in radio repair, and realized that some radios sound better than others.

What makes the difference in a good electrical circuit, and a bad one, he wondered? He already knew the answer:

Since the brain operates on a small amount of electrical energy, the same principle should hold true:

The mind did not reveal its secrets to José Silva easily. He persisted, investing his own time and money, continuing even though critics scorned him.

Today he is recognized as the leading researcher in the world in the field of the mind and human potential. And Jose Silva's UltraMind ESP System is leading humanity into the beginning of the second phase of human evolution on the planet:

How your brain works 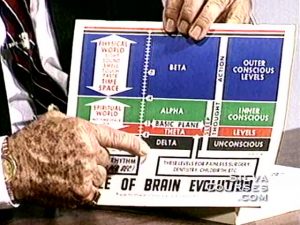 Unlike other computers, the electricity that the brain generates and functions with does not remain at a fixed frequency.

Scientists call these vibrations "cycles" or "Hertz," and have divided the brain frequency spectrum into four different segments, based on the number of cycles per second, which is abbreviated cps.

Jose Silva reasoned that the best range to use for mental activity would be the range that has the least impedance and the most energy.

The alpha frequency is the strongest current-wise, and the most rhythmic of the four.

That's why it was the first to be discovered by scientists with their primitive sensing equipment, and was named "alpha" for the first letter in the Greek alphabet.

How people use their mind

It seemed logical to Jose Silva that the alpha level would be the ideal level to do your thinking, if you could learn to actually activate your mind while at alpha.

But here's the catch:

Research revealed that most people do their thinking at the beta frequency!

Most people, when their brain frequency slows to alpha, enter the "sub-conscious" area, and then fall asleep.

Most people are using the weakest, the least stable frequency to do their thinking: the beta level.

But the superstars stay awake at the alpha level, and do their thinking at alpha.

In order to do this successfully, you must learn two things:

Everybody can daydream. Passive daydreaming is sometimes done at the alpha level.

But even if you can daydream at the alpha level, you might wind up going straight to beta when you become mentally active and direct your imagination the way you desire.

Besides being the most efficient operating level in terms of low impedance and high power output, there is another very important advantage of using the alpha level:

At the alpha level you can access data that has been stored on two brain hemispheres instead of just one.

At beta, you can only access data that is stored on the left half of your brain - your left brain hemisphere.

The left brain hemisphere is used for storing information you detect with your physical senses: what you see and hear and touch and experience in the physical world.

The right brain hemisphere is used for storing information you detect with your subjective (mental) senses: your psychic senses.

Will you double your ability when you learn to think with both brain hemispheres?

You will do much better than that.